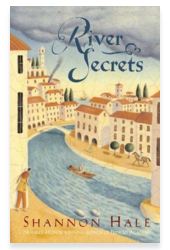 This is a post for my LIS S401 class: Computer-Based Information Tools.

For reference, here are Razo and Enna:

These cats are named after two characters in a book series I have read several many times over. Shannon Hale was first recommended to me by Bev, our children’s librarian. After reading the Book of a Thousand Days by Shannon Hale, I began reading the Books of Bayern in reverse order (on accident!). I didn’t realize they had an order. The books were so well-written that I didn’t need the background stories to follow along. 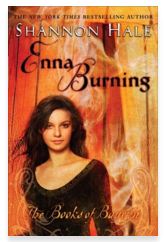 There are four Books of Bayern:

Enna the cat and Razo the cat are named because their personalities line up closely with their corresponding characters.

River Secrets follows Razo’s journey as he travels into the land of his enemies, Tira. He feels useless and questions why he was even picked to accompany fellow members of Bayern’s Own on an important ambassador mission. Razo’s friendly personality and his keen eye for noticing things end up playing a huge role in the mission.

This is the one book out of the four that I can read over and over again and never get bored. There’s so much action, so much humor, and so much story to tell.

River Secrets is a story of compassion, understanding, and compromise.

It’s the only book in the series of four that features a male character (Yay for strong female characters!), but Razo’s tale is one of uplifting and supporting his female friends, and it is in no way your typical male-hero story.

River Secrets is captivating and will leave you questioning who the real bad guy is until the very end.

I highly recommend you check out the entire Books of Bayern series by Shannon Hale, and River Secrets isn’t one to pass over.

I'm a birder who loves to write. View all posts by Stefany